Last December I made a decision to alter my habits and drop some weight.  I stopped drinking any sodas (called pop here), spent more time in my kitchen, and started working out.  I didn't dive into it by any means.  The food from my kitchen wasn't necessarily your typical diet food, but I controlled my portions. As often as I could, I logged it in some software that tracks nutrition, weight, and workout info.  The workouts started with just walking, and not super fast at that.  Little by little, I cranked up the workouts.  The food was always hit or miss, but I did go for months without eating out.  The weight was dropping steadily.  Around the new year, I decided that I would resolve to run in the annual Mosquito Haven Half Marathon held here in early August.  There was a lot of work to do to get ready.  I did start running and was getting much better.  Of course, this was on the treadmill because it was the middle of winter.  As spring thaw arrived and I started running on gravel, I realized I had much more work to do!  The hills and the gravel take much more energy than the treadmill.

Then summer arrived.  The school year is busy enough, but it seems that there is indeed a trend for an even busier summer.  You would think I would be able to be more active and lose more in the summer, but between a busy work schedule (which leads you to eat quick, easy, calorie laden food) and doing things that are outdoors but not physically demanding (going to a cookout on the beach, berry picking, etc.) you run out of time to dedicate to fitness.  I noticed quickly that I was putting some weight back on.  I was disappointed but still determined to keep my resolution. 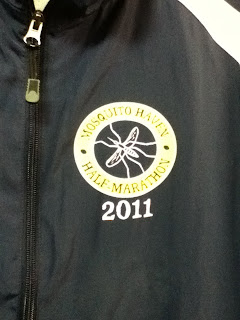 People can participate in the half marathon by walking, biking or running.  Anyone who participates receives a light jacket like this one.  At the end they also give prizes to the first finisher in each category by age class, and there's a raffle for lots of other prizes. 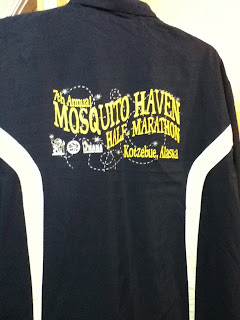 I decided well before the event that I was not in shape to run it this year, but I could still walk it and work on running it next year.  So, I did walk.  About two thirds of the way through I caught myself thinking that even if I hadn't undone much of my hard work during the summer, I still would not have been able to run it yet.  Thirteen plus miles on gravel and hills is not easy! 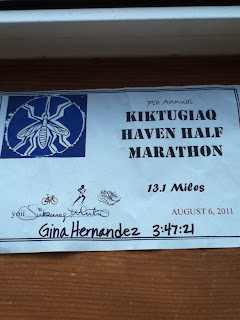 So, walk it I did.  There's the proof, and there's my time.  Unfortunately, throughout the rest of August I continued to undo my work.  The first two weeks of August were so busy with organizing our Camp Willow (which fell through due to weather this year -- very disappointing), the last couple of Junior Ranger programs, working on a teacher workshop and being available during teacher inservice.  I found myself pulling a couple of all-nighters just to get things done.

After two weeks of "vacation"  (just kidding PEL & MEL!), I came back to dive into school programs and village visits.  The first, Kiana, asked me to stay the entire week.  That's great.  That means I have something they're looking for.  However, it's not easy to be healthy on these trips.  I stay in the school.  I might have access to a fridge or a place to cook something.  However, I have to travel as light as I can because I'm hauling boxes of props and program materials, so I can't bring my whole kitchen with me.  Whatever I take has to be lightweight, compact, and able to withstand being thrown around in the back of a little plane.  It's usually something like jerky, crackers and cheese.  This time I took some tuna packets and pilot bread.

The room I stayed in this year in Kiana looked like this: 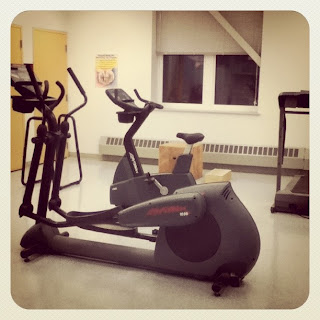 It had been turned into a fitness room.  I thought that might be a big hint!  I did have time to use the equipment.  However, since I try to pack light, I usually only take 1 uniform, 1 change of clothes for the evening, and I wear my uniform boots the whole time.  This room was originally a special ed room, and it has a bathroom with a shower off of it, so I could take a shower, but there's no way to wash and dry clothes.  So, I didn't use the equipment.

Now I've been back in Kotz for the week, and I'm leaving for Noorvik on Monday.  That's the way it will be the majority of the school year.  Travel and in town on and off.  I know what I can do, though.  I felt and looked so much better earlier this year.  I just have to pick one of these days and make a choice.  It might as well be TODAY.  So, first steps:  1) stop the sodas effective immediately, water consumption must increase 2) going to the gym starts tomorrow morning 3) by the time I return from Noorvik, the eating out will be at a minimum.

If you're so inclined, make your own good choice with me!
at 9:24 AM No comments:

After 2 years working at Western Arctic National Parklands, I finally could say on August 8, that I have been on the ground in all four parks.  The whole interpretation division (5 of us) flew out to the Great Kobuk Sand Dunes which are 25 square miles of sand dunes in Kobuk Valley National Park.  The dunes formed from wind-blown deposits after the last glaciers receded.  They used to cover a much larger area, but the vegetation is steadily establishing itself and encroaching.

We flew to the Kobuk River in float planes that hold the pilot and up to 3 passengers.  From a certain point on the river, we hiked south to the dunes. 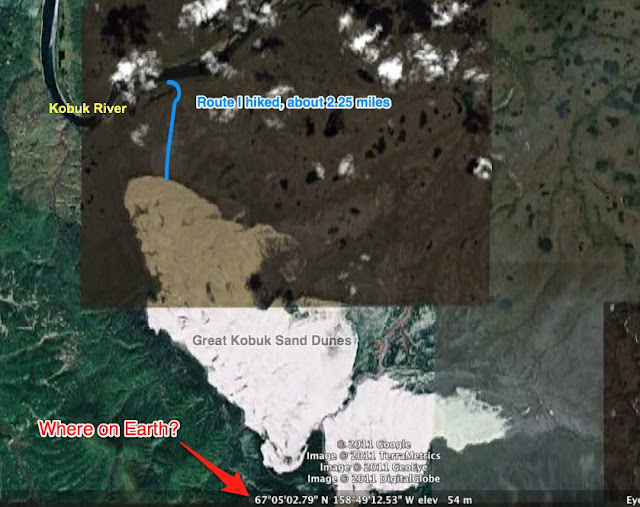 From the river, you hike uphill a bit through spruce forest.  It's fairly thick through part of the way, and there are patches of tussock tundra to cross.  We took our time, looked around, and stopped frequently, and it took a little over 2 hours.  Here are some shots along the way. 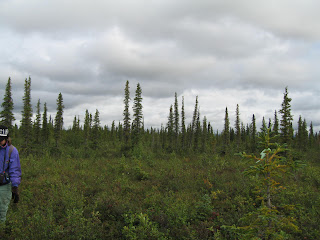 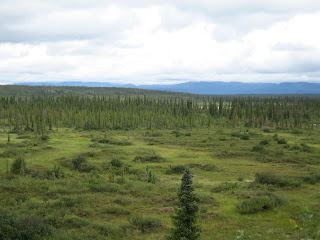 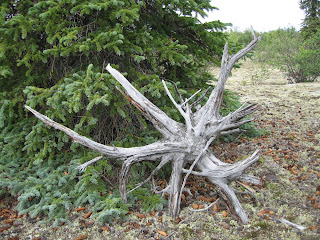 I didn't take enough pictures along the way.  Probably the last mile before reaching the dunes, the trees opened up, and there were birch and aspen (I think) in addition to the spruce.  You can almost see in this picture the ground covered with lichen.  It was a nice, easy walk.  Since there was a big group of us, we were making plenty of noise, but this is bear country, and you definitely don't want to surprise one.  We didn't.  We didn't see any wildlife.  Since we were following some GPS waypoints, we knew we were close to the dunes, but when you arrive, it's quite dramatic.  You're walking through the trees, and all of a sudden, you see a wall of sand.  It's a bit of a scramble to get to the top of that wall, but when you do, you see... 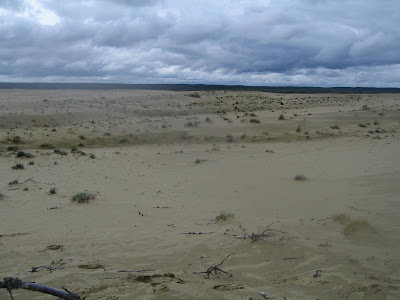 Here are a few more pictures:

The dunes are formed by wind, and it was a bit of a windy day, so everything was gritty.  You might wonder how plants can grow in the middle of this sand.  It was interesting that just a couple of inches below the surface, the sand was wet and compacted.  Plants like the quaking aspen can get what they need to survive, and their roots stabilize the sand.  Then dead plant parts begin to form a layer of soil, and other plants begin to grow alongside.  This is how the sand dunes become vegetated.  See the Kobuk Valley National Park website for more information.

It was a really nice day out there.  It drizzled on and off and was overcast and windy, but that kept the walk out nice and cool.  During the summer, some people come up to float down the Kobuk River, so this is the kind of trip they could make.  If you have the money, there are a couple of companies authorized to fly visitors to the dunes.  You could either fly in on a float plane like we did or land on other places around the dunes with wheels.  If you have the chance, it's worth it.  Kobuk Valley National Park is one of the least visited national parks, so it's not something that most people will see.
at 8:59 AM No comments:

I'm still seriously playing catch-up here. Let's go back to mid-July. I had the opportunity to spend some time on the ground in Bering Land Bridge National Preserve at Cape Espenberg. One of the regional archeologists started a mentorship program for high school students that allows them to work on a dig in one of the parks for 10 days and be paid. She couldn't go out in the field with them this summer, so she contacted me to be their mentor. The archeologists on site taught them the archeology. I just had to travel with them and make sure they got up for work (which was more difficult than you might think).

There were 4 boys & 1 girl. Most were from local villages with 1 from Anchorage, but his grandparents live in Kotzebue. As you might infer, it was buggy at times! We had a good mix of weather, though, and the kids all had a good time. We all met in Nome then flew to Shishmaref, an endangered village on a sand spit on the Bering Sea. From there the arch site was a 3 hr boat ride up the coast to the north point of the Seward Peninsula. This whale skull has marked the point for as long as anyone alive can remember. Once we arrived, we all added our tents to the small village already formed by the archeologists. An amazing cook, Rae, provided food for everyone in camp, which ranged between 20 - 30 people. Everyone else, including the students, took turns helping out. The rest of the day we all spent our time digging and cleaning and sorting in the lab tent. The biggest challenge of our time out there may have actually been these little guys! The ground squirrels ruled that turf and even chewed through a few tents to prove it.

The kids had fun, but I think we were all ready to go home. They were eager to get ahold of some sodas, and everyone wanted a shower!
- Posted using BlogPress from my iPod