Other than family being scattered in four directions, Christmas was good this year.  I had put up the tree for the first time in quite a few years (a few different reasons for that), and being closer than ever to the North Pole, I couldn't help but catch a festive spirit.  Here's a picture of what the place is looking like. 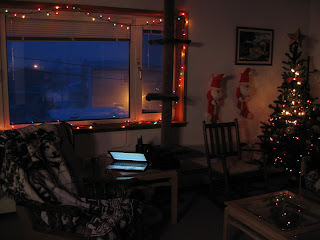 The weather was perfect for the day, not too cold, clear, little wind.  Having passed the winter solstice on 12/21, everyone was in good spirits knowing that more light is available every day.  Of course, we were never completely in the dark.  I haven't yet taken the time to figure out why during the summer there's about a month where the sun never goes down while in the winter, at least in this location, we're not completely in the dark.  I think the shortest day was just over 2 hours long.

The Hogans invited me over with some other folks for Christmas dinner.  They had lots of food already prepared, but when another lady and I were asking what we could bring, they mentioned a couple of items.  Would you believe that of all places, ice cream is on the menu for Christmas dinner here?  I've been told that Alaska is the state with the highest per capita ice cream consumption.  I believe it, too.  I decided to make homemade ice cream again, and every bit of it was eaten.  Everyone there said it was great...thanks for the recipe, Mom!

We had a good group of folks there, and we spent close to 12 hours eating, talking, playing games, eating again, and talking some more!  As I headed home arount 1:00 AM, I got my first glimpse of the northern lights.  They were very faint, and if someone hadn't pointed them out, I probably would have missed them altogether, but it was exciting to know that's what I was looking at.  They're usually visible in the wee hours of the morning, and since it was kind of a struggle to normalize my schedule here, I haven't been staying up to watch for them.  We're also in a low spot on the 11-year sun spot cycle which means less auroral activity.  I think we'll be set for more displays in about 3 or 4 years.

I don't have plans for New Year's Eve yet, but I've heard great things about fireworks in past years here.  Apparently they take the show out on the ice of Kotzebue Sound.  I've been told that because of the cold temperature the colors are very vibrant.  I haven't heard any announcements of fireworks for this year, but I'm hoping the tradition continues.  I have my mittens and scarf (thank you Mom & Dad) ready to go and have been looking for an excuse to walk out on the ice.
at 7:06 AM No comments:

I had every intention to keep posting while I was on the road, but when I got to the fancy-schmancy Marriott we stayed in for our conference, I found out they were charging almost $10/day to connect to the internet.  Yeah right!  There was one public computer which, of course, was always occupied.  In general, I was NOT impressed with the Marriott in downtown Hartford, and I definitely wouldn't pay to stay there on my own.  So, being removed from my routine and networking, I've fallen off the blogging wagon again.  I'll try to get back on!

The conference was for National Association for Interpretation.  It was pretty good.  I learned much more about what people in my position across the country actually do.  I met several NPS colleagues from the Alaska region.  Some of these people I had emailed and spoken with on the phone, so it was nice to put a face to them.  Very nice people over-all.  I stayed busy with the conference and didn't get a chance to check out anything about Hartford, but it was nice being in a place that feels connected to the rest of the world!

One day that week we got to go on a field trip.  We had to sign up for the one we wanted to take before the conference, and I selected mine one day way back while my boss read the descriptions over the phone to me so she could submit us for early registration.  I wasn't really sure what I'd be in for.  The theme was related to programs that accomplished their goals with a small budget and/or small staff.  We first went to a place owned by the CT Audubon Society at Milford Point.  It was nice to get outside, nice place, a few good ideas.  Then we went to the Yale campus to the Peabody Museum of Natural History. 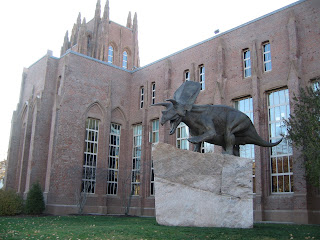 Mixed feeling about this part of the field trip.  The presentation about what they were doing with their interpretive program was good and gave me some good ideas.  The museum also had some cool exhibits.  It is, however, a private museum that is interpreted through the lens of evolution.  There was, in fact, a whole exhibit that was practically a shrine to evolutionists.  Unfortunate that such nice collections are used to indoctrinate scores of kids that visit.

I did find a couple of things for you, Mom.  The first picture is a mummified cat (there was a small Egyptian exhibit).  The second is a bonnet.  It reminded me of yours, but I dare say this one took even more work!  Unfortunately, I didn't write down where it was from, and I already forgot. 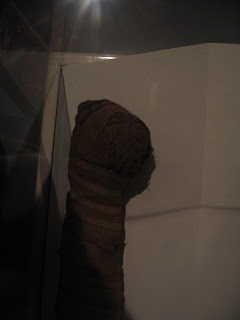 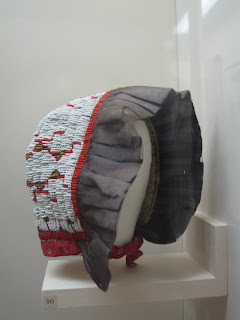